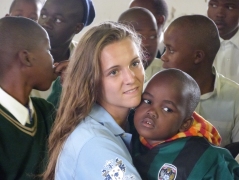 Chloe Tindale, one of two St Mary’s Menston pupils who met Prince William at a Diana Award ‘Inspire Day’, with Zulu children in South Africa earlier this year. Follow the link at the bottom of this post for the full story.

Menston villagers have been celebrating one important battle won to keep the character of our lovely Wharfedale village and its surrounding countryside: the plan to erect a gigantic wind turbine behind High Royds, twice the height of the iconic clock tower there, was refused permission. The fight against development on the Derry Hill and Bingley Road sites, which apart from destroying the character of our village would lead to more flooding and increased sewerage flowing down the street, according to the best expert evidence, continues.

Chairman of the Menston Community Association Steve Ellams, left, with Secretary Alan Elsegood and Menston resident Roger Livesey (centre) outside City Hall before Steve’s presentation of a petition signed by members of communities in Wharfedale whose representatives joined the Menston team inside the Council Chamber for the presentation

It is understood that the Parish Council intends to reply to the dreadful letter received from Cllr Warburton, the letter being greeted with disgust and disbelief at the Menston Community Association meeting on Wednesday 4 December. 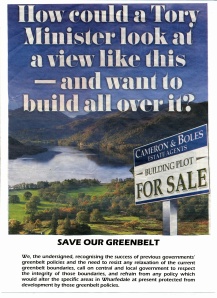 Click here to read the presentation ‘Save our Greenbelt’ given to the full Bradford Council on Tuesday 10 December by Steve Ellams, Chairman of the Menston Community Association.

The need to support local shops and businesses was an important topic at the meeting and a suggestion of the need for some kind of campaign was greeted with approval. Parish Cllr Sue Rix said that there was an urgent need for more, and more suitable, notice boards around the village, promoting local business being one function of them; this suggestion was greeted with approval. Among comments from the floor was “Why people pay more for inferior produce when our local greengrocer brings fresh from the market every morning is beyond me”. Another said they were glad to buy meat there, supplied from Burley.

A Menston Christmas celebration next year?

A suggestion from the floor was that there was a need to set up small working groups to move forward this and other projects proposed, among them a village Christmas celebration event based around better Christmas lights next year. Comments from villagers that “It is really upsetting that I have to go to another village for such an event when we used to have one in Menston” were related from the floor.

MCA Chairman Steve Ellams said that there would be a ‘bucket collection’ at next year’s Menston Car Show (note the countdown to it on the right has now reached 4 months!) and funds raised would go towards the Christmas event.

Another important battle being mounted is against the closure of the Menston and Burley Children’s Centre, with its magnificent ‘new’ facility behind Menston library. A petition is circulating and available to sign in shops around the village.

More inspiring news continues to come out of the excellent high school in the village, St Mary’s, from excellence in sport to meetings with Prince William. Read about it on a page giving more details.