Let’s have a 20mph limit for Menston 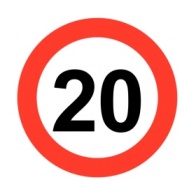 Road sign for a 20mph speed limit, not the same as a 20mph zone

Many Menston village residents have indicated that they favour a speed limit of 20mph throughout the village, but some may have been misled by comments from the Chairman of the Parish Council planning committee, Cllr Metcalfe, at the recent Neighbourhood Forum. He seemed to say that if there were 20mph limits there would have to be ‘speed bumps’. This is not true.

First, it has to be recognised that there is a difference between ’20mph Zones’, as there are in parts of Menston now, and a ’20mph speed limit’.

20 mph zones require that no point in the ‘zone’ is further than 50m from a traffic calming feature, unless the road is a cul-de-sac of less than 80m in length. A 20mph speed limit has no such requirement.

However, according to the charity which is the expert source of information on 20mph limits and zones – ’20’s Plenty for Us’ – the requirement for traffic calming measures is often misinterpreted in the UK as meaning physical speed constraints such as speed bumps and speed tables (vertical) or chicanes, road narrowing and build outs (horizontal). Bradford Council traffic officers certainly seem to misinterpret in this way (and want to continue to do so in what they have proposed for the village). In fact, the charity says, it can mean gateways, road markings, hatching, carriageway roundels or rumble devices. Humps and bumps are not a requirement.

So, it would seem that we could have a 20mph speed limit throughout Menston and all that would be required would be the 20mph signs at each of the entry points and small 20mph roundels mounted on lamp posts at intervals. Every English authority has a traffic sign authorisation which permits them to place a 20mph speed roundel road marking as a repeater sign (without the requirement for an upright sign), to reduce unnecessary signing. A low cost solution with no massive engineering works disrupting the village in the short term and defacing it for ever after.

Apart from this, 20splentyforus says that the introduction of physical measures has many disadvantages, many of which have already been pointed out by Menston residents, these including:

The charity has a very good website with ‘everything you need to know about 20mph limits’. It’s worth a good look at:

There’s a conference ‘It’s time for 20’ on 18th February; unfortunately it’s in London, at Camden Town Hall, and costs £125 to attend. Click here for full details.

One response to “Let’s have a 20mph limit for Menston”