Maria Sage, 13 years old, managed to beat all the adults and score the most points for her entries at the Menston Village Show on Saturday 6 September, taking the Fawcett Trophy awarded to the overall winner. She won three other trophies for entries in her age category, taking the cups for photography, handicrafts and flower arranging.

Click any picture in the gallery below to see them larger, with captions, as a slide show.

Best in Show was taken by D Ascough with wonderful entries of dahlias, and best children’s entry in show was won by Charlie Hooton with a superb miniature garden, complete with greenhouse.

Click the following link to the Menston Show pages (or click the show button in the right side-bar) to see all the prize and trophy results. You will also find a link to a list of all the prize winners in the Menston Business Association (MBA) ‘Young People’s Activity Zone’. 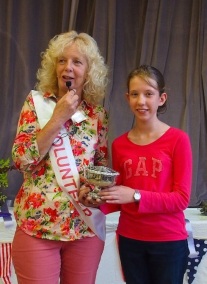 Highest points in the show, Maria Sage is presented with the Fawcett Trophy

Where’s that? Young competitiors tackle ‘Where in Menston? in the Menston Business Association youngsters zone

Waiting for the trophy presentations 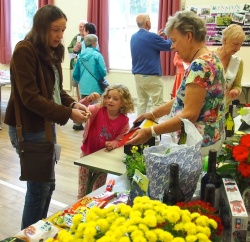 Have I won? At the tombola

How was that? 30 step-ups in one minute 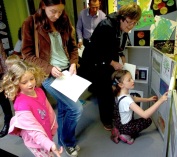 Those are big onions!

Owen and Maria Sage with cups for floral art, novelty and baking 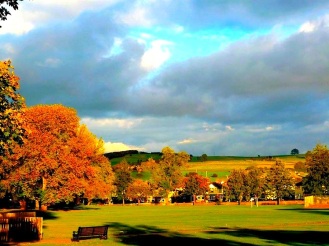 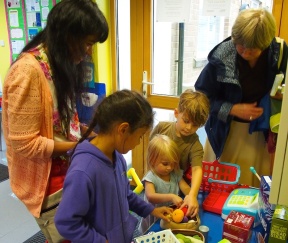 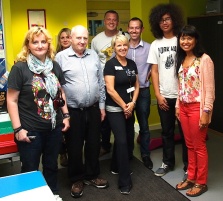 The MBA team from members Cleasby Kindercare, Smallprint, JGL Design, The Studio Pilates and Ribson Pippin with other helpers Petronela Prisca and Beth Street and her son Saun

Chris Wilson with the Derek Bonde Trophy for Fruit and Vegetables

Bryan Butler being presented with the Fred Ashton Trophy for Flowers

You have a tea grandad; I just need to sleep! 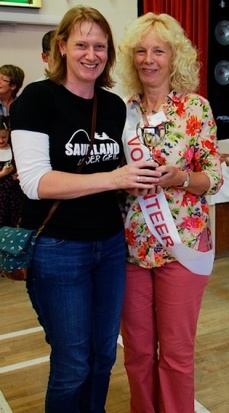 Children and parents fascinated by the miniature gardens made by children 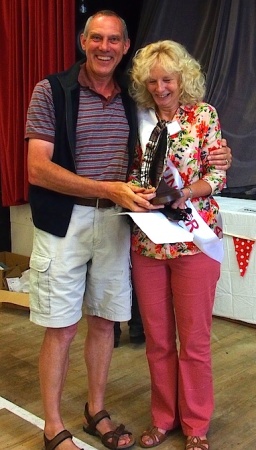 In the MBA young people’s activity zone, the most popular activities were a property game to match people and cartoon characters with their houses, staged by estate agents Ribston Pippin, and a mini toy supermarket for under sevens, staged by Cleasby Kindercare and sponsored with produce by the Menston Coop.

Identifying places in Menston from photographs taken around the village fascinated some children (and perplexed even more adults) though no-one identified them all and no-one managed to correctly translate to English the date in Roman numerals on the old primary school building.

Identifying leaves from locally growing trees, assembled by Elizabeth Loy, also attracted some young contenders though none managed to get them all right, the top score being ten of 12.

Top prizes of vouchers to spend in Menston’s Solo delicatessen and coffee shop were won by Rebecca Shaw (1st, £12.50), Dylan Britchford (2nd, £7.50), Imogen Baker (3rd, £5). All the MBA prizes and accompanying certificates can be collected from Solo.

Answers to the ‘Where in Menston’ and ‘Menston History’ quizzes in the MBA ‘zone’ are now on this site here; the ‘Identify the leaves’ answers, with photos of the leaves, will be on the site soon, so visit again. In fact, why not ‘follow’ this site by entering your email address in the box towards the top of the right side bar and you’ll get an email notification of each new post, usually not more than one a week.