Panto week  – Aladdin – this week, Thursday, Friday and Saturday evenings and an afternoon matinee on Saturday. More details, including how to get tickets, under Events. For the first time this year there will be dancers from the ballet classes held in Kirklands on Tuesday afternoon/evenings and Saturday mornings; more details of these classes too in ‘Events‘, where they are listed. For the classes, contact menston@btapacademy.co.uk.

Apologies for the confusing times/dates for the panto in the ‘Imminent events’ on the right. It’s a Google thing. When Menston organisations do not send in details an event might be put in without a time; Google then decides it’s midnight. When the actual time is subsequently known, no way of deleting the ‘midnight performance’ has yet been found.

Another useful community site for Menston?

Have you seen the new Streetlife community site which has a page for the area “local to Menston” (www.streetlife.com)? It seems to aim to serve the same purpose as the ‘Menston village group’ on Facebook but it could be very useful for people who dislike Facebook intensely so do not go on it. You just sign up and say what area you are interested in. It doesn’t seem to understand that Menston and Guiseley are quite different so you get some Guiseley stuff when looking for Menston, but it’s a small price to pay. Recent items included someone looking for a lost cat, someone wanting to know where they could get tickets for the panto, some give-aways, and objections to the new proposal for a wind turbine.

Preserve us from even larger local authorities!

We are aware of course that the battle to preserve a way of life in Menston is not unique and the problems with large local authorities are not confined to Bradford. Aireborough MPs took up the issue recently in the House of Commons, among them our own MP Philip Davies: http://www.theyworkforyou.com/whall/?id=2015-02-03a.49.1 The complaints about Leeds City Council – from ignored to ignorance – sound only too familiar.

Grumpytyke says: Do we believe that creating even larger regional authorities, as proposed for ‘the north’ or Yorkshire, will bring more “local decision making”. Of course it will not; it will just mean more jobs for would-be politicians. What we need is real local decision making, ie, when the people of Menston vote overwhelmingly against a proposal which they know very well will destroy their village, it should not be over-ruled by some regional authority like Bradford, let alone one for ‘Yorkshire’. What we need is more power for the Parish Council; if it had power then capable people would stand for election to it, people would vote for them, and we would have true ‘local decision making’. As it is, I suspect that the forthcoming Parish Council elections will be ignored by most residents, as past ones have so the PC just re-elects itself.

Pictures at the end; click any one to see them larger as a slide show

Menston schools pulled the stops out in the period leading up to half term. On the back of excellent GCSE etc results St. Mary’s rightly proclaimed their success with a “We are outstanding” banner across the front of the school. However, it’s not only about excellent results in the classroom or producing the right ticks for Ofsted, but the excellence carried through into another of the school’s superb shows ‘ ‘We will rock you’, based on the songs of Queen.

Meanwhile, Menston Primary was busy hosting an important guest, none other than Dr Who, who arrived to a red and orange goo-spattered playground in Tardis. Ominously, a Dalek arrived too (but the school is still there!). Dr Who was interested to hear what was ‘interesting’ about Menston, and the pupils were keen to tell him, having considered the question as part of their lessons. The parents have not been idle either, backing Menston in Bloom and Wharfedale Naturalists to create a willow tunnel in the school field.

10th anniversary for Menston in Bloom

Over the past ten years Menston in Bloom’s dedicated volunteers have planted bulbs, trees, shrubs and flowers throughout the village and been rewarded with awards in Yorkshire in Bloom and we have all benefitted from a beautiful village. The Yorkshire in Bloom judges will be visiting early in April so preparations must begin. The group’s first work party session is on Saturday, 21 February and you can meet up with them at 9.30am outside of Kirklands. If you cannot make that you can contact the group by email at menstoninbloom@gmail.com .

Dr Who, having appeared in Tardis along with a Dalek and red and orange goo, listens as Menston Primary School pupils tell him what he’ll find interesting about Menston

Volunteers from Menston in Bloom and Wharfedale Naturalists joined Friends of Menston Primary to plant a willow tunnel in the school’s field. 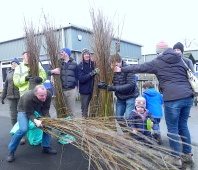 Hearing that Dr Who was due to arrive, Menston Primary pupil Lucinda Leeming took on the arduous task of wrapping herself in ‘the scarf’ (Photo by Justin Leeming)