Anti-social behaviour in and near to Menston Park; A65 junction; Alan Ayckbourn in Menston

The author of this site has recently become aware of a discussion on the village Facebook site (he does not like or use Facebook but it was shown to him) concerning anti-social behaviour by a small group of boys (11-12 years old?) in the park or adjacent to it on Easter Sunday. Following a notice about it, some Facebook users who clearly had no direct knowledge of the incident ‘defended’ the boys concerned saying they were “just kids” with nothing to do and only doing what “we all did” in our youth and they would soon be back at school and the problem would go away. Not true!

These are three extremely unpleasant youngsters looking for trouble and the Easter Sunday incident is not unique; at least one of these boys, who seems to be the ‘ring-leader’, has been seen behaving unsociably in the park on several occasions when schools were not on holiday. 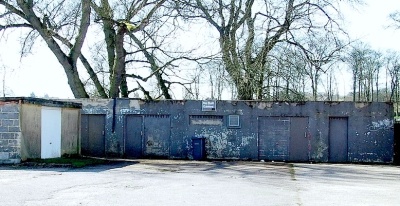 The Low Hall Road side of the eyesore building at the side of Menston Park, behind the Scout hut. A magnet for the more unsavoury elements of Menston youth.

Location for ‘seedy’ goings on

The building on which they were misbehaving, that behind the Scout Hut, is the location for frequent seemingly ‘seedy’ goings on with young people. It is adjacent to the ‘over 55s’ flats at Menston Hall and Sunday’s incident was unpleasant for those residents because of the appalling, obscene language used, loudly, by the boys on the roof of the building over a period of around an hour. Another young person did remonstrate with them only to attract taunts – laced with obscenities – to fight.

The park side of this unpleasant looking building

What is more, when the three left it was not before attempting to smash in the doors of the building, whatever it might be.

Insulation, kicked free by boys on the roof, hangs down. Notice the many gaps in the edging stones.

The boys involved in the Easter Sunday incident will be reported to the police; publishing their pictures on this site was considered but they would probably just enjoy the notoriety and indulge in even more anti-social behaviour.

It is a great pity that this small minority spoils a wonderful Menston amenity; it was a joy to see the park full of families and young people on Easter Sunday. Just a few need better educating to use the many litter bins!

However, whatever authority is responsible for this building should be taken to task by the Parish Council. Buildings in this state inevitably attract hooliganism and further vandalism.

Another corner of the park which attracts unsavoury elements is at the back of the children’s playground behind another ugly building, or on the other side of the fence behind it. This is a pity as many young children play there usually doing no more than hide and seek though they often need to be reminded not to trample down the flowers planted by residents. Almost every morning empty packets and drinks cans/bottles are scattered here even though there is a strategically placed litter basket (see photo). In fact litter in the park is far more widespread. Easter Monday morning litter next to the seat close to the building mentioned above, with a litter bin adjacent, is shown in another picture below.

Park corner behind the children’s playground

NB. The Alan Ayckbourn play at the Highroyds Social Club is this coming Friday evening, not Friday 17th as originally listed in ‘Events’ and in the ‘Imminent events’ calendar. These have now been corrected but unfortunately this may happen when things are picked up ‘on the grapevine’. A plea to Menston organisations: please send information on your events, meetings, etc in good time to menston.village.wharfedale@gmail.com otherwise they can occasionally be mis-publicised or not publicised at all.

Another discussion on another social media site ( click Streetlife) is worth a look by Menston residents (and joining in). What began as a discussion about Otley’s one-way systems has now spread to include discussion of the Bingley Road/Buckle Lane/A65 junction and traffic lights.

2 responses to “Anti-social behaviour in and near to Menston Park; A65 junction; Alan Ayckbourn in Menston”