Although the events listing on this site has been kept pretty much up to date, as far as possible when information has been sent in (or things heard on the village grapevine), posts have been erratic, due principally to health problems. Hopefully posts will now become a little more regular. Remember, to ensure your event is listed under the Events menu (and the ‘Imminent events‘ list in the right column – this can take a while to appear after updating Events) email title, date, start/finish times, contact info, and ticket price if any, to menston.village.wharfedale@gmail.com. This has become even more important due to the suspension of publication of ‘It’s the business‘ (see below).

How can we make Menston more dementia friendly? 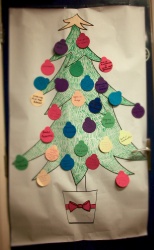 Dementia Friendly Menston ideas were recorded on this Christmas tree

About 35 people met at Kirklands on Tuesday afternoon to learn more about dementia and to begin a process of making Menston more ‘dementia friendly’. They learned a lot about dementia from specialist Dr Elizabeth Milwain (eg, symptoms which are just normal signs of old age and those which are early signs of a dementing condition) and then, in a couple of workshops, noted activities already found in the village then suggested what might be done in the future. If you could not get to the meeting but would like to be involved contact Jane Pratt at Menston Cares (876945) or Allyson Hargreaves (870528).

Let’s light up Menston for Christmas

The paucity of Christmas lights in Menston, compared with neighbours Burley, has been a cause for complaint for years. However, such lights are extremely costly. Now there is a suggestion that our village could become much more festive if every householder lit up their own house in some way. To give even more incentive, estate agents Ribston Pippin and the Solo delicatessen have got together to offer a hamper for the best decorated house. There are now posters around the village giving more information. More information on some Christmas events under Events.

Many of the elderly ‘students’ in the eggs2iPads project, which has been meeting weekly at the Menstone club with a team of teenage ‘teachers’ helping them to get on line using an iPad or other tablet, have said they do not like to leave home in the dark during winter months, even if they are accompanied or transport is provided. It has been decided that in this situation there will be a a winter break in the sessions after this week’s meeting, to be resumed in March next year. Some of the young ‘teachers’ are from St Mary’s high school, which has been recently been involved in a broadly similar project, but for school pupils, in South Africa (see below).

The Bambisanani Partnership, which links St. Mary’s School, Menston and Mnyakanya School in South Africa, has recently provided twelve hours of training for South African teachers to be able to use tablets to enhance teaching and learning across the curriculum at Mnyakanya High School.

The computer giant Intel contributed to the training costs and thirty more tablets, provided by the Bambisanani Partnership, will arrive or have arrived at the school for students to use in lessons.

Chairman of the Bambisanani Partnership, David Geldart, who recently retired as an Assistant Head at the school, said: “This initial training and the tablets are a starting point for us. More training and hardware will hopefully follow but our goal is to establish full internet connectivity at Mnyakanya”. 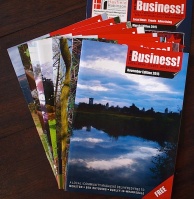 The free monthly magazine which has been delivered to most households in Menston for the past several months, ‘It’s the business‘, will not now be published “until at the earliest March 2016” we have been told. The magazine not only had a Menston events listing under the heading ‘Community News’, compiled by the author of this site, but also a specific Menston page. These for the December edition were already done but unfortunately will not now appear. This site cannot match the information reaching most houses in Menston but apart from trying to ensure the Events listing here is even more complete and up-to-date consideration will be given to how this information can now be more effectively made available to those who do not have access to internet.