Inspiring pupils, including two from St Mary’s Menston, at the Diana Award day with Prince William

The sixth form students were invited to the event because of the school’s pioneering work in South Africa using sport to promote education, health, leadership and global citizenship which is now in its seventh year.

Commenting on the day, Chloe said, “Prince William even joined in some of the team building activities. It was really strange to be standing next to Prince William, however it showed that he was not afraid to get stuck in and that he had an obvious community spirit.

“Overall, I loved the whole day in South Shields. I learnt so much in such a short time, have made contact with some amazing people and really have the drive and desire to work hard in continuing project work in the future. I am very grateful to the Diana Award for including me in such a great opportunistic day and hope their work will continue to be recognised by the Royal family as a great charity.”

Kavi added, “Tessy Ojo, Chief Executive of the Diana Award, introduced Prince William to our group and he began to speak to some of us about the individual projects that were being run. I wasn’t expecting to speak to him because I thought he would have moved on but the Prince reached out to shake my hand and we began talking! At first I was slightly star struck to see the man that is always on the TV, in front of my eyes speaking to me, the future King of England. I described the work of the Bambisanani Partnership, especially the development of leadership skills through sport and forming young leaders in Mnyakanya High School, which the Prince seemed genuinely interested in as he asked me further about how St. Mary’s came to establish such a link with a South Africa school.

“Speaking to Prince William and attending the Diana Award event, I can truly say that I have been inspired and empowered to strive to do more for the development of the Bambisanani Partnership, which has received huge admiration. All in all, I had a wonderful day with memories that will last a lifetime.” 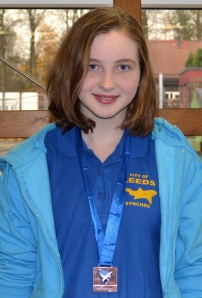 Izzy Palmer, 13 years old, is continuing to excel at her chosen sport of Dressage on her pony Gregonne Coco Chanel, stable name Coco. Here is an update on the thirteen year old’s stellar progress:

Her first national squad training for excel talent is held in December.  The Excel Programme which is funded by Sport England, looks to provide a pathway to underpin the World Class Programme and help riders develop to be the best they can be in their chosen discipline.

Samantha Breen has been competing at the exciting Olympic sport of Synchronised Swimming.

“I won a medal at the Scottish National age groups. I swam as part of the City of Leeds 12 and Under squad. I was in Glasgow for 3 Days (25 October – 27 October) and competed against teams from Scotland and across England. We came third in our age group. Our next big competition is in Gloucester (29 Nov – 1 Dec) and is the British National Age Group Synchronised Swimming Championships.”

Mr Wilkes, Student Progress Leader for Year 8 at St. Mary’s praised the girls, saying, “Once again well done to both girls. I am sure there will be more to celebrate as they move up through the years at St Mary’s.”