Back again following a long summer break. Making a start updating the site are all the details of the forthcoming Menston Show, the 41st, next Saturday. The show has its own set of pages, giving full details of all the classes which can be entered. There are quite a few changes from previous years, particularly in the ‘junior’ section.  Especially noteworthy is that 15 and 16 year olds no longer have to compete with adults in some classes, notably in some art, baking and handicrafts classes. The detailed pages can be accessed from a link under the Events menu, or by clicking the image in the right hand column under the countdown, or here.

As in recent previous years, it is hoped all the results from the Show, with photographs, will be published on this website on Sunday 11 September.

Sessions of the eggs2iPads project, in which older members of the Menston community get together with a team of teenagers to learn about accessing internet and other ‘apps’ on tablets like the iPad, Kindle Fire or others, are due to start again after a summer break on Thursday 15 September at the Menstone club in Farnley Road. As before, the sessions are from 5pm to 6pm. 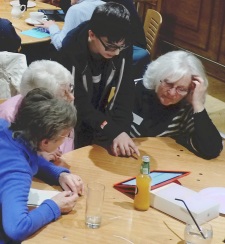 The project , which has been highly praised not only locally but nationally and even internationally, is run under the umbrella of the Menston Community Association. However, it needs some more help. Roger Livesey, who launched the project and has led it since inception, has said that due to health he can no longer lead it though he hopes to attend many sessions. His role has been taken over by Tony Joint who has been one of the adult supervisors for the past year, but one or two more are needed. With two ‘vulnerable’ groups attending, an adult with DBS clearance is always present. It is not necessary to attend every week and if someone does not have DBS clearance it can be arranged.

Some more teenage ‘teachers’ would also be welcomed; again it is not necessary to be able attend every week. Anyone from 12 to 17 will be welcomed.

More details of the sessions for any elderly person who would welcome meeting regularly with a great team of young people, or anyone who would like to volunteer to join the teaching’ team or as a supervisor, contact:

The High Royds Memorial Garden and Chapel, on Buckle Lane, will be open for some periods during 8 to 11 September as part of the Heritage Open Days 2016 promoted by the Leeds Civic Trust. More details from Chairman of the ‘Friends’, Ron Sweeney, on info@itcworld.org, or Secretary Quentin Mackenzie, tel 01943 876625.

The garden has recently had considerable work done as a result of funding received and the efforts of volunteers, including some pupils from St Mary’s Menston. It is hoped to feature this beautiful spot in Menston in a future post on this website.

IPad project to support Menston elderly off to a good start, as is cheese club

The eggs2iPads project got off to a great start on Thursday evening at The Menstone club in Farnley Road; five enthusiastic, elderly ‘students’ turned up thanks to Menston Cares, which brought them, and the idea that this first session would be just a ‘get-to-know-you’ social occasion was quickly put aside. With the special welcome cake, from the Village Bakery of course, tea, coffee and other drinks consumed, iPads were quickly turned on and ‘teaching’ began.

The six strong teaching team, Adam (France), Hattie (Barnes), Joe (Woollin), Luke (Guzder), Sam (Craske) and Shaun (Street) were soon hard at work solving questions on the iPads and, sometimes, on other tablets brought by some of the students – Dorothy, Janet, Jean, John and Pat – and some supporters. The young team all attend local schools, St Mary’s Menston, Guiseley School and Bradford Grammar School. All are members of Menston’s Explorer Scouts.

Apart from the volunteer drivers who brought the elderly people, thanks are due to Menston Community Association members Sue Rix and Tony Joint, Menston Cares Chair and Officer Jane Pratt and Sue Lee, and Beth Street, who came to support, and Petronela Prisca who temporarily joined the ‘teaching team’ with her iPad 2 and iPad Mini 3. 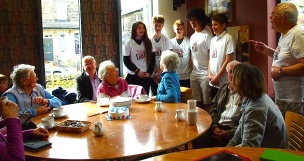 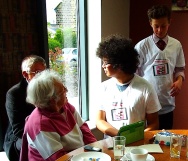 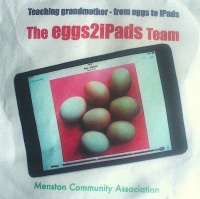 Project ‘logo’ on T-shirts worn by the ‘eggs2iPads’ team

One question resolved was “Where do the eggs come in?”, the long project title being ‘Teaching grandmother, from eggs to iPads‘ (see below – surprisingly many had not heard the saying).

A fine evening of Yorkshire cheeses

First meeting of Wharfedale Fine Cheeses Cheese Club at The Menstone. Jeremy Benn on the left of the table, Caroline Bell on the right. 10kg of Shepherd’s Purse cheeses behind.

The Menstone was also the venue later the same day for the first meeting of Wharfedale Fine Cheeses‘ Cheese Club, hosted by Jeremy Benn, founder of the local company. A packed downstairs at the club tucked in to about 10kg of cheese from Shepherd’s Purse cheeses of Thirsk following a great introduction from Caroline Bell, daughter of founder Judith Bell. Caroline gave a good explanation of the differences between the different blues, comparing them to well-known French creations like Roquefort.

For another approach to the above stories see the grumpytyke blog.

Don’t try to teach your Grandma to suck eggs (from www.phrases.org.uk)
Don’t offer advice to someone who has more experience than oneself.
These days this proverbial saying has little impact as few people have any direct experience of sucking eggs – grandmothers included (This may be true in the UK but is certainly not true in Romania where egg shells are decorated for Easter and many ‘suck eggs’- Editor).
It is quite an old phrase and is included in John Stevens’ translation of Quevedo’s Comical Works, 1707: “You would have me teach my Grandame to suck Eggs.”