A number of innovations in the classes, especially acceptance of 15/16 year olds who in previous years had to compete against adults, attracted some wonderful entries to the 41st annual Menston Show last Saturday.

Some of the prize and trophy winners

As usual on this website, clicking on any picture in the montage below will show all pictures larger, with captions, as a slide show.

Dahlias made a big comeback, as did flowers generally following a summer which did not favour fruit and vegetables. Show stalwart Elizabeth Loy picked up two cups despite finding time to again mount her guessing game with animal, vegetable, mineral specimens; “I think I found five future geologists”, she said.

Junior entries showed a wide range of creativity and skill and best in show went to a superb bit of baking by Olivia Ashworth Ellis with her focaccia bread with olives and home grown rosemary. Handicrafts, both junior and adult, displayed tremendous skill.

Burley’s Dougie Ascough was back to scoop the fruit and vegetable trophy, share the flower trophy with Raymond Pollard for magnificent dahlias, and again take the overall show winner trophy.

Another innovation was to ask Barnoldswick town crier, Elisa Mowe, to present the trophies in her full regalia. Elisa, who spent much of her life in Guiseley, will be moving back to Menston to live soon.

Thanks to sponsors and donors

The show owes much to many donations from Menston businesses, including members of the Menston Business Association and the two sponsors, Menston estate agents Ribston Pippin, and Shipley Paint (Manor Coating Systems). Show President Sue Rix also paid tribute to the team of volunteers, including the show committee, who work tirelessly to make the show a success and invited anyone interested to join them to contact her.

Full results for all classes can be found by clicking on the Menston Show Results logo in the right hand column.

Is she going to eat one?

Olivia Ashworth Ellis with the Barbara Hannam Trophy for the best junior entry, for her facaccia bread

Best in Show in the Junior classes; focaccia bread made by Olivia Ashworth Ellis 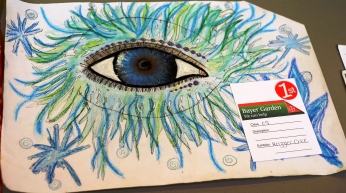 Chloe Snowden won the 6 years and under Handicrafts Cup, together with Noah Hillerby

Elizabeth Loy with the Joan Pullan Cup for flower arrangement. She also gained the Rose Wood Trophy for the best single rose

Admiration for the baking entries

Carol Baldam with the Menston Show Handicrafts Cup which she won

Billy Barker with the 7-10 years Children’s Cup for Floral Art, Novelty and Baking

Elisa Burns with her Lego swimming pool which gained her the 7-10 years handicrafts best in class, and the handicrafts cup jointly with Lucy McNabb

J Endersby with the Menston Show Photography Cup gained with her two entries, including best in class for her dawn/dusk picture

Elizabeth Loy holding one of the two trophies she won, the Rose Wood Trophy for a single rose

Sophie McNabb won the 6 years and under cup for floral art, novelty and baking

Those look good! Entries in the junior baking with ‘Best in Show’ Focaccia in the foreground

Owen Sage who won cups for floral art, novelty and baking as well as for handicrafts in the 11-14 years classes

Now what class is this?

Wonderful cauliflower sheep which got Chloe Sowden and 1st place

Admiring the fruit and vegetable models