Hosts Audra and Gareth at Delicasolo, their delicatessen/pavement cafe on Main St, Menston, which will become a ‘bistro’, open late, for the weekend of the Grand Depart. Menston’s popular delicatessen and pavement cafe will be serving ‘bistro’ food and beers and wines to match on Friday, Saturday and Sunday.

Menston’s popular delicatessen and pavement cafe, Delicasolo,  will be serving ‘bistro’ food with beers and wines to match from Friday to Sunday over the Tour de France Grand Depart weekend. With a drinks licence until 9pm, the popular spot will be open until 9.30-10.00pm for those who want to escape a mile or so up the A65 from the Burley-in-Wharfedale bypass Tour route and the biggest crowds. On Saturday morning coffee etc will be served from 6.00am!

In addition to the usual snacks, from olives to Mediterranean breads, there will be a variety of ‘bistro’ type plates including Pulled Pork Tacos with Spicy Sauce, a Beef Ragout, Chicken Tandoori with Bombay Potatoes, and a locally-produced Burger. Prosecco and a variety of reds and whites will be available to wash them down, together with a choice of beers and cider including a Pale Ale from the Goose Eye brewery in Keighley, brought in just for the occasion.

It will be a busy weekend for hosts Gareth and Audra as the other side of the business, Solo Catering, will be supplying the food to a number of private Le Tour parties in the area.

Watch the Grand Depart on the Big Screen in Menston

Menston Methodist Church will be presenting the Grand Depart of the Tour de France on the Big Screen, as it happens, from 9.00am till 2.00pm on Saturday 5 July. The Cornerstone will be open for refreshments with its usual fayre from 10.00 until noon, then light refreshments will be on sale in the main hall from noon until 2.00pm. So if you’d like to watch this great event with others but away from the heaving crowds this might be a good solution.

The future of the Menston Community Association, the independent charity of which all Menston residents of voting age are members, will be the subject of discussions at the monthly meeting on Wednesday 2 July, at the Methodist Church Hall, Main Street, at 7.30pm. No formal agenda has been issued.

Following the recent resignation of the Chairman, and the announcement of impending resignation by the Acting Secretary and former Chairman, replacements for these key officer roles are needed.

At an earlier meeting of the MCA committee the possibility of the Parish Council taking on some of the activities of the Association was discussed. The MCA has, of course, played a key role in opposing the inappropriate housing developments proposed by Bradford Council on Bingley Road and Derry Hill. However, it has also been a key player in important and successful village events like the Jubilee celebrations in 2012 and the Menston Village Vehicle Show earlier this year.

The second of occasional contributions from grumpytyke

The promised News flash. this site is looking for two young aspiring journalists to keep it up to date for young people in menston. If you’re interested click here for further details!

Just two weeks since this site was launched and it’s already had over 250 different visitors and almost 2,000 visits, and it’s yet to be indexed by Google.

Surprisingly though, some visitors have not just been local or even just from the UK but include some from Belgium, Bermuda, Italy, Romania, Spain and the United States.

Followers have been building more slowly, probably as there seem to be few WordPress bloggers (or bloggers at all) in Menston so they need to subscribe to ‘follow’ by email. But it’s the only way to keep up with the news, by getting a notification each time there is a new posting. The same seems to apply to comments: quite a few via email to menston.village.wharfedale@gmail.com – all positive so far – but few using the ‘comment’ box at the bottom of each post and page. As there will be a new post not more than twice a week your email box will not be bunged up by us.

Why are younger adults less community minded – or so it seems?

In the ‘About’ page for this site there is a comment about the many greetings you will get on a walk down Main Street. However, there is a distinct split in the reactions according to age, more so with males. I wonder why this is.

A Menston resident contributor has also commented that he would like to see more ‘younger’ people getting involved in village activities, commenting “Just a bit conscious that there are a lot of elderly groups in the village but less for ‘younger’ people, especially those which encourage activity & social interaction”.

I know of social activities proposed where the positive response has been far greater from people over about 30 than from those less than this. It’s not a matter of them having children as children have been welcome and events have been timed to suit them.

Returning to the ‘greetings’, in my experience most people over about 30 who are met on Main Street will exchange a greeting, and many women who are younger. But when it comes to younger men, it is noticeable that many will positively avoid eye contact, even when greeted. Why is this?

In praise of a Yorkshire ‘English’ Sunday pub lunch

If you like a traditional Sunday lunch, and I do: roast – beef, lamb or pork – Yorkshire pud, roast spuds and a few veg. But if you don’t want to cook, a visit to the Malt Shovel in the village centre is recommended, especially as it won’t hurt your pocket very much. £5.50 for two courses – main and either soup or sweet of the day. 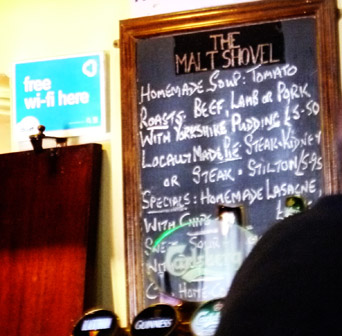 None of the other village pubs can match that, in fact few anywhere. You can of course add a sweet if you opt for the soup including, eg, that favourite hot chocolate fudge cake and cream/ice-cream. And there are alternatives to the roast, including pies and lasagne. Last orders for lunch are at 1.45pm.

It’s good old-fashioned Yorkshire cooking like my grandmother used to do, except that the veg are not cooked to death as hers always were.

In fact you can eat lunch at the Malt Shovel any day of the week and the menu extends to more than a ‘roast dinner’.

In Menston village, a traditional Sunday lunch with hints of Indian haute cuisine cooking? It was launched last Sunday by Menston’s only dine-in Indian restaurant, The 1875 at Menston railway station. (Read more below) 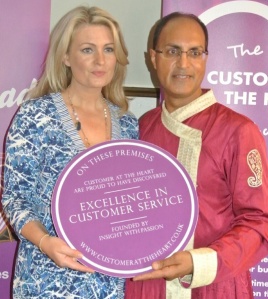 A long-established Menston village ‘fitness’ business has recently had a make-over as The Studio to highlight its ‘Modern Pilates’ training, both for people who wish to engage in Pilates exercises and for the training of ‘modern Pilates’ trainers. (Read more below)

Menston Village Pilates centre; Christine North-Minchella in the studio with the model of a spine used to show how Pilates can help alleviate back pain

More on the above stories …

This interesting innovation was launched at The 1875 restaurant with a ‘VIP’ lunch on Sunday 11 August, at which the list of local business people was headed by Kate Hardcastle, among other things a Business Woman of the Year, Mum of the Year and who this year became a director of Bradford Bulls.

August could be the time to try this different Sunday lunch as there’s a special offer until the end of the month: a booking for two brings one free starter from the ‘a la carte’ menu; a booking for four gets you one free main course. The basic price is £9.99 (£6.99 for under 10s). On Tuesday to Saturday evenings there is an ‘Early bird’ menu for £9.95, 5.30 to 6.45pm (closed Mondays and Sunday evenings).

The 1875 uses local produce if possible and all meat and poultry for all dishes are sourced in Yorkshire. The Sunday lunch (12.30 to 3.30pm) menu will vary around the ‘roast of the day’ – pork, lamb, chicken or beef and other seasonal joints – all served with Indian sides and trimmings. Vegetarian options are served too.

As the main roast varies it would be a good idea to check what it will be on the Sunday you wish to eat there in case you do not eat some meats.

Owner of the 1875, Manjinder Singh Sarai, says “we genuinely don’t know anywhere else in the UK, nor in the world, that is offering this”. The menus are created by Michelin Star trained chef, Vivek Singh Kashiwale.

The Studio, discreetly tucked behind a large house at 9a Cleasby Road, is run by specialist personal trainer Christine North-Minchella BSc PGCE YMCA. With a small but bright and airy studio, it caters for eight clients at one time who can also rest and socialise over a coffee in the garden in good weather or the adjacent conservatory when it’s not so good. Parking is no problem even when the road is cluttered with commuters’ cars as its own car park inside the gate caters for eight vehicles.

Christine specialises in Pilates for older adults and women who are pregnant, catering also for people with osteoporosis or following hip or knee replacements. The small groups mean “I can give individual attention to each person in the studio”, she says.

She will only train with ‘modern Pilates’, commenting that “Joseph Pilates, were he alive now with modern knowledge, would agree that some of his exercises are now contra-indicated”. These are not used in modern Pilates as taught by Christine.

Pilates exercises of this kind can also help with back pain problems, she says, citing participants in the courses who say they have become a ‘new person’ as a result of the Pilates.

The Studio also runs courses in ‘Modern Pilates’ for Pilates instructors/teachers. Not only Pilates however, there are personal trainers, general fitness courses and small group yoga.

Long term residents of Menston may remember 9 Cleasby Road as a veterinary practice, so there has been a business there for more than a quarter of a century. The Studio caters now strictly for people, but maybe pets could benefit from Pilates too; who knows?